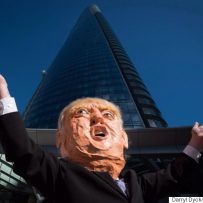 VANCOUVER — When developer Joo Kim Tiah announced in 2013 that his spiralling skyscraper project in Vancouver would bear Donald Trump’s name, the main controversy was whether the glitzy luxury hotel was at odds with the city’s reputation as a home of casual yoga-pants-wearing types.

A lot has changed since then.

Vancouver’s Trump International Hotel and Tower has transformed into a potent symbol of Trump’s candidacy and presidency, observers say. Protests over U.S. policy inevitably end up on its doorstep and provincial and city politicians have said the Trump name doesn’t represent Vancouver.

“It’s more than a beacon of racism,” said Coun. Kerry Jang, who has urged the developer to drop the Trump brand. “It’s a beacon of intolerance. It’s a beacon of sexism and bullying. That’s just not Vancouver.” 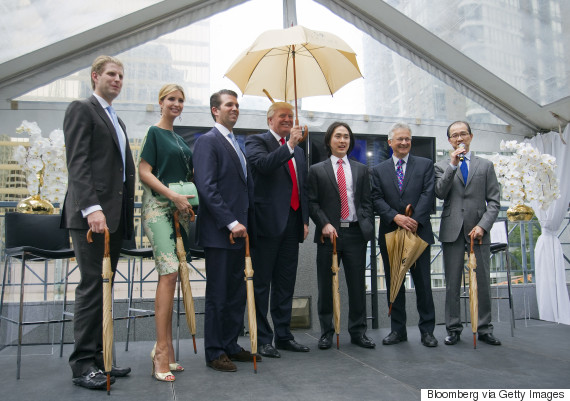 The $360-million hotel and condominium development, with a unique twisting design by late architect Arthur Erickson, had a soft launch last month. Protests are being planned on social media to greet Trump’s sons, Donald Trump Jr. and Eric Trump, at the grand opening Feb. 28.

Tiah, the president and CEO of Holborn Group, is the son of one of Malaysia’s wealthiest businessmen. The Trump Organization does not own the tower, but licensed its name for branding and marketing, while the Trump Hotel Collection operates the 147-room hotel.

The building’s more than 200 condominium units sold out last year, the National Post reported. Tiah told the newspaper in November that the media had a “vendetta” against the U.S. president and rejected suggestions that the Trump brand had taken a hit.

But in Vancouver, known for its multiculturalism and progressive politics, Trump’s anti-immigrant rhetoric has given the tower an uneasy place in the city’s skyline.

After Trump’s call in 2015 for a “complete shutdown” of Muslims entering the U.S., a petition urging Holborn Group to dump the Trump name attracted 56,000 signatures. Mayor Gregor Robertson joined the chorus of residents in a passionate letter to Tiah in December 2015.

“Trump’s name and brand have no more place on Vancouver’s skyline than his ignorant ideas have in the modern world,” Robertson wrote.

Also in December 2015, British Columbia Premier Christy Clark said it was up to the city and the developer to decide whether to drop the brand, but she agreed the name doesn’t represent Vancouver, adding she didn’t think Trump would be “good business” in Canada for much longer.

Tiah was unavailable for an interview, but told the Post that removing the Trump name would have led to “enormous financial and legal ramifications.” Talk Shop Media, which handles media relations for the opening of the tower, did not return requests for comment.

Lindsay Meredith, a marketing professor at Simon Fraser University’s Beedie School of Business, said the hotel is aimed at high-income business people, who tend to be well-educated and more likely to be offended by Trump’s comments and policies.

“It doesn’t take much to kick that kind of clientele into the arms of yet another high-end luxury establishment,” he said.

Hundreds marched past the tower in a raucous protest after Trump’s election in November as well as during last month’s Women’s March. Someone briefly changed its name to Dump Tower on Google Maps. 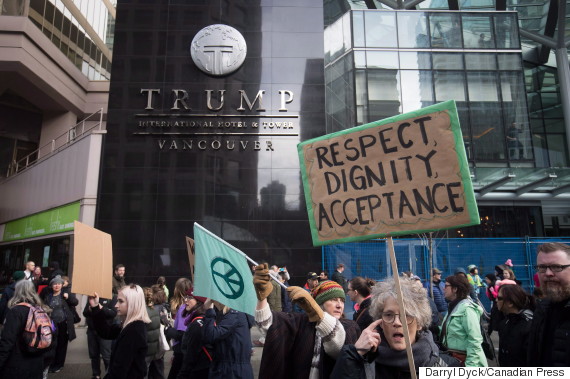 People march past the still under construction Trump International Hotel and Tower during a women’s march and protest against U.S. President Donald Trump, in Vancouver, B.C., on Saturday January 21, 2017. Protests are being held across Canada today in support of the Women’s March on Washington. Organizers say 30 events in all have been organized across Canada, including Ottawa, Toronto, Montreal and Vancouver. THE CANADIAN PRESS/Darryl Dyck

The American Chamber of Commerce in Canada was also recently involved in a flap when it rented space inside the tower for an event, prompting questions about whether the business group was trying to curry favour with the new U.S. president.

Chamber member Laura Ballance said the group is non-partisan and had to scramble to find space after its planned location fell through just two days before the event. It usually tries to hold meetings inside American-owned or branded spaces, she said.

“The Trump tower fell within that list and it was the first one to respond,” she said.

But the incident that may have attracted the most international attention was in April 2016 when Diego Reyna, a Mexico-born Canadian citizen, flew the Mexican flag from the tower. 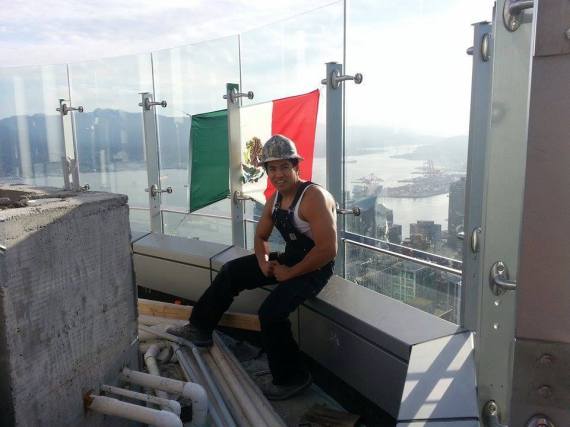 Reyna, a structural steel framer, said he didn’t work on the building but he knew more than a dozen Mexicans and other immigrants who did. He wore his construction gear and casually passed through security. A guard even apologized for not opening a gate quickly enough, Reyna recalled.

“That’s the beauty of Canada,” he said with an appreciative laugh.

The 31-year-old grew up in Chiapas, the southernmost Mexican state, where his father worked in a mine 16 hours a day and his mother worked three jobs just to afford one meal a day for her children. When he heard Trump criticize Mexican immigrants, he knew he had to speak out.

“He said when Mexico sends its people, they’re not sending their best. That’s where I disagree,” Reyna said. “The most brilliant minds of my generation, the most creative and intelligent brains, have all been Mexican and they’ve all been struggling with poverty.

“The only message is be kind when you judge those who were not born with the privilege that you have,” he added. “You want to build a wall? Great. You don’t want immigrants in your country? Perfect. But don’t tell the world that we are criminals and rapists.”