$7.6M IN RENT ARREARS PILE UP ON LONDON TENANTS AS WORKING POOR STRUGGLE 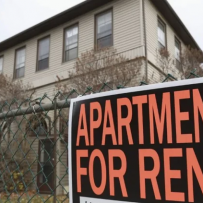 With $7.6 million in unpaid rent and thousands of units in arrears last year, the London area nearly topped a list of Ontario communities where people fell behind, second only to Toronto.

Rental arrears were part of the Canada Mortgage and Housing Corp.’s annual rental report for the first time, and London clocked in with 8,130 units where tenants had fallen behind on rent. That’s about 16 per cent of all units in the London census metropolitan area (CMA), which covers London, St. Thomas, Strathroy and parts of Middlesex and Elgin counties.

“It’s incredible insight into what’s happened over the pandemic in terms of rent,” said Mike Courey, director of the London Poverty Research Centre.

Workers who help people with housing struggles have full caseloads already, Courey added, but often they’re working with people without any home at all.

“There’s a layer above the most vulnerable, and that’s probably these people in arrears,” he said. “These are the working poor, people who aren’t connected to community agencies already. They’re really left not knowing where to go.”

The CMHC’s annual report on the rental market shows other mid-size communities and large urban centres, such as Hamilton, Kitchener-Waterloo, Ottawa and Windsor CMAs all had fewer units in arrears than London last year, though Windsor had the highest percentage of units where rent was owed, with more than 22 per cent.

Many other areas across the province weren’t included in the rental arrears figures, which CMHC describes as “suppressed” data to protect confidentiality.

The COVID-19 pandemic walloped workers and renters across the province, but other factors may have pushed Londoners closer to the margins. Though the vacancy rate rose last year after hitting a 20-year low, average rent across all units is up seven per cent from 2019, now at $1,119 a month, according to CMHC data.

And the areas that topped the list of arrears, including the London region, have the highest rates of people with low income, based on tax filings. About one in every six people in London and area is low-income.

“Windsor, London and Toronto all have relatively high low-income rates relative to other parts of Ontario . . . which does imply many working poor, struggling to make ends meet,” said Don Kerr, a demographer and professor at King’s University College.

“Clearly persons working in certain sectors, such as retail and in our restaurants and bars, have been hit harder than other sectors (during the pandemic), and many of those folks are relatively low income, and close to the edge.”

Getting behind on rent could lead to a desperate spiral.

“With 16 per cent of people who are renting in London in arrears, this is going to show its face either in evictions or coming into the Landlord Tenant Board,” Courey said, adding it could push some into homelessness and increase demands for community and social supports.

A provincial pause on evictions ended this week, as Ontario’s stay-at-home order was lifted. A political push at Queen’s Park to ban evictions during the pandemic failed.

The poverty research centre is focusing on educating tenants about their rights and the resources to help navigate the maze of processes and procedures at the Landlord Tenant Board, including working with a new peer support group, the London Tenants Association.

“When your housing is under attack, your self-esteem could go very low and you could start not being able to advocate for yourself,” Courey said.

Connecting those facing eviction with legal advice or representation is another key concern. Organizations like Community Legal Services and Neighbourhood Legal Services offer those services but have seen a huge demand and budget cuts. The majority of people go unrepresented.

A first draft of a tenants handbook is also in the works, with a plan to focus on spreading that knowledge among London renters.

Rental units in arrears in 2020, by census metropolitan area:

Percentage of rental units in arrears in 2020, by census metropolitan area:

Story by: The London Free Press