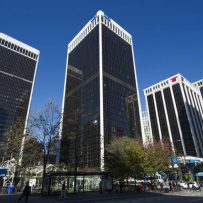 Global uncertainty, the low loonie and Canada’s tempting lifestyle, economy and commerce has made Vancouver and Toronto increasingly attractive to foreign commercial real estate investors — particularly those from China and the U.S., according to new research by Colliers International.

The research, published last week in the form of several infographics, claims that foreign investment into Canadian commercial real estate climbed by 143 per cent in the past six months, to $1.85 billion.

In that period, $798 million of that incoming capital ended up in Metro Vancouver, said Sarah Goulding, national market intelligence analyst for Colliers. “And this has been all from China.”

Nearly all of the inbound investment into Canada originated from China (42 per cent) and the U.S. (48 per cent) during that period, according to Goulding’s findings.

Goulding said her method involved reviewing internal data collected by their own agents, and she also conducted property transfer searches with Real Capital Analytics, a global commercial real estate data and analysis firm. She said she searched for commercial real estate transactions valued at or above $2.5 million.

“There’s been a ton of activity in terms of international investment taking place,” Goulding said. “I just wanted to share some other facts on why this might be a very good time to invest in our market, particularly in Toronto and Vancouver.”

“From a global perspective, Toronto and Vancouver are recognized as two of the top most-livable cities in the world, and from economic standpoint those are the cities that are performing quite well,” she said last week.

“Additionally, the low Canadian dollar is really an advantage for an international buyer coming into the market right now.” Perceived factors such as Vancouver’s highly educated workforce, livability and political stability all paint a rosy picture for prospective investors, she said.

“I think all of the elements play a big part whether it’s a company or an investor looking to locate into one of our markets,” she said.

A total of 1,896 commercial properties in excess of $1-million changed hands last year, up 37 per cent over 2014 transactions, according to the report. Meanwhile, total investment dollars reached $7.95 billion — a 31-per-cent increase.

“When you think [commercial real estate] couldn’t get any busier, it really does find another gear,” said Paul Richter, director of research for Altus Data Solutions Canada.

“There’s just an amazing amount of deals that are taking place across pretty much all price thresholds, with varying degrees of motivation and in all asset classes,” he said. “It seems to be a perfect storm of a number of different motivating factors depending on who the purchaser is.”

Richter said the apartment building market has been the most bullish in recent months. “And most notably the Metrotown area, where you’re seeing developers purchasing apartment buildings with very, very low cap rates,” he said. “These are properties that are coming to the end of their lives in their current form. They could be rejuvenated and restored by somebody.”

He said residential and commercial land deals also surged upwards, totalling 1,192 transactions in 2015, up 42 per cent from 2014. What’s most notable is the “increase in land sales or the increase in property transactions by people who are seeing it as a land transaction rather than a long-term investment play”, he said.

Richter said the report did not assess whether the source of investment capital was domestic or international.

Dan Scarrow, of Canadian Real Estate Investment Centre in Shanghai told The Sun earlier this month that the children of Chinese-Canadians — by his own calculations — are in line to inherit more than $1 trillion over the next 30 years.

He said a portion of that money would be used to buy real estate.

• Vancouver (3), Toronto (4) and Calgary (5) were all in the top five most liveable cities, according to the Economist Intelligence Unit’s Global Liveability Ranking, 2015

• Canada ranked as the world’s ninth least-corrupt country on the Corruption Perceptions Index, 2015

• Ranked as the 12th most innovative country on the Bloomberg Innovation Index, which assesses countries based on R&D, manufacturing, technology, education and patents