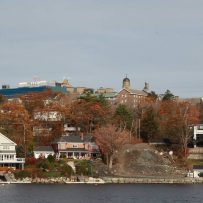 It started with the best intentions: Keep taxes on coastal properties, owned by the same families for generations, affordable.

The problem was soaring assessments. In the early 2000s, buyers were scooping up seaside vacation properties in Nova Scotia, sending market values – and property tax bills – through the roof.

With people on the brink of losing family homesteads and waterfront farms, a minority government ushered in a cap on surging assessments in 2005, backdating the legislative change to 2001.

But a SaltWire Network investigation has revealed that the wealthiest property owners in Nova Scotia have benefited most from the cap.

Multi-million-dollar properties in Chester on the South Shore, on the Mira River in Cape Breton, and in Halifax’s south end have received among the largest property tax breaks in the province.

“It’s absolutely clear that freezing the assessments has the biggest cash benefits for the people with the most expensive properties,” says Dalhousie University economics professor Lars Osberg.

Here’s how it works

Rather than taxing a home on its market value – widely considered the most equitable way to levy municipal taxes – municipalities can only tax assessments with increases capped to inflation.

While the market value of a home may increase five per cent, for example, the increase in its taxable value is capped at a 1.67 per cent – the average annual change in the consumer price index in the province over the last decade. The only time the cap is lifted is when the property is sold.

While it has protected homeowners from sudden and dramatic increases on their property tax bill, municipal officials warn that the cap is having “unintended consequences” and eroding tax fairness and housing affordability.

The quintessential example is two identical houses, side-by-side on the same street. One has been owned by the same family for decades, benefiting from the cap since its inception.

But the house next door recently sold. The cap is lifted, and the new owners are facing a property tax bill nearly double their neighbours – despite living in a matching house, on the same street, receiving the same services.

Colin May, a former Dartmouth city councillor before amalgamation, has lived in his home on Dahlia Street for 37 years.

He admits his home is “grossly under assessed” resulting in a lower tax bill for him than his neighbours, a “young couple” that recently moved in.

“It’s unfair,” he says, arguing that the cap should be phased out. “The longer they wait, the worse it gets.”

The situation has prompted one local mayor to call it a “newcomer tax,” as it puts new buyers at a disadvantage.

Others pay for your savings

Experts say the cap has distorted the property tax system, shifting more of the tax burden on first-time home buyers, seniors looking to downsize and federal employees in the RCMP and military who are required to move for work.

Waye Mason, president of the Nova Scotia Federation of Municipalities, sums it up like this: If you’re saving a dollar on your taxes under the cap, it’s because somebody else in your community is paying a dollar more than their fair share.

The Halifax councillor says homes in wealthier neighbourhoods with higher income earners have generally benefited more from the cap, because those are the areas that tend to have rising property values.

“Houses that aren’t going up in value significantly that are owned by lower-middle income families end up paying more than they should because the tax rate ends up going up,” he says.

In Halifax alone, the difference between the market value of properties – what they could sell for – and the taxable value is more than $3 billion. Across the province, the spread between the two is approaching $7 billion.

And yet municipalities still have to pay for services like garbage collection, snow removal, recreation, fire protection and policing. With operating budgets continuing to grow, the tax burden is simply redistributed.

Mason says Halifax’s tax rate could drop between seven and 11 cents per $100 of assessment if the cap weren’t in place – while still collecting the same revenues. In the Cape Breton Regional Municipality, he says the rate could fall a whopping 34 cents – a savings of nearly $1,000 for a new homeowner with a $300,000 house.

The cap is also having an insidious impact on housing affordability, in particular with a group not normally associated with property taxes: Renters.

While a renter doesn’t directly pay property tax to the city, they could be indirectly paying more in higher rent.

According to a 2017 Halifax staff report, the majority of low-income individuals in Halifax reside in apartments, which are not eligible for the cap. “The cap has shifted higher taxes towards apartment buildings while also making it more difficult for renters to purchase their first home.”

Municipalities across Nova Scotia are calling on the province to scrap the cap, and on Wednesday the government opened the door to a potential change.

During an address to delegates at the Nova Scotia Federation of Municipalities fall conference, Municipal Affairs Minister Chuck Porter offered his support for an all-party committee to review the provincial assessment cap.

“The current model isn’t working for everyone, and we welcome the opportunity to be part of any serious discussion and analysis of alternatives,” he said in an emailed statement.

“The work needs to be done to determine the most equitable solution. We would not want to see one broken system replaced by another.”

“The provincial cap on property assessment has led to a variety of tax inequalities and distortions,” he said in an emailed statement. “We also believe that people should not be taxed out of their homes or uprooted because of changes in the housing market.”

Halifax currently has a rebate program for homeowners with a household income under $34,000, as well as options to defer property taxes.

“Mitigation is best done by targeting assistance to those who need it most rather than tampering with the assessment base,” Enid Slack, director of the institute on municipal finance and governance at the Munk School of Global Affairs at the University of Toronto, and Harry Kitchen, professor emeritus of economics at Trent University, said in a 2014 report.

“This can be done through property tax credits and tax deferrals that are targeted to those taxpayers that can least afford the property tax increases.”

Meanwhile, it’s not just homeowners impacted by the cap. It also affects the commercial-to-residential tax ratio as well.

“The higher the ratio gets, the tougher it is on business,” explains Terry Bishop, the president of Property Tax Canada at the Altus Group, a Toronto-based commercial real estate services firm.

“The ratio would be higher than what we’re actually showing in this report,” he said, pointing to a recent Altus Group report that found the ratio in Halifax was 2.87 – slightly higher than the national average. If the cap were removed and Halifax lowered its residential tax rate by a dime, for example, the spread between the taxes would be even higher.

“We don’t like to see ratios climbing because that gets tougher on business operators, which can then have a trickle-down effect on the local community,” he says, adding that, overall, the cap is bad policy.