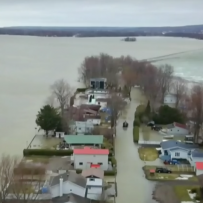 One woman has died and hundreds have been forced from their homes after spring flooding washed out parts of Quebec and eastern Canada, prompting the deployment of Canadian Armed Forced soldiers to provide assistance as waters continue to rise.

A 72-year-old woman died Saturday morning after driving her car into a massive sinkhole caused by flooding in Pontiac, Que., police said. Other drivers parked nearby tried to warn the woman, identified as Louise Seguin Lortie, but she couldn’t stop in time.

Officials in Quebec and New Brunswick said that the brunt of the flooding isn’t expected until Saturday evening and into Sunday. They added that warm temperatures, coupled with the fact that local rivers area already swollen from melting snow could lead water levels to accelerate rapidly.

The federal government promised assistance, and Canada’s Armed Forces said it would be deploying “reconnaissance teams” to Quebec and New Brunswick to help.

As of Saturday night, rising rivers in Quebec has already resulted in 903 flooded residences, 251 isolated residences and 317 evacuees across the province, said Urgence Quebec, which identified eight major floods. They include the Chaudiere River at Saint-Georges, Saint-Joseph, Scott and Vallee-Jonction, Lake of Two Mountains, Quesnel Bay and the Beaurivage River.

The agency said that some of the worst flooding occurred in the Beauce region south of Quebec City, where 886 homes were flooded and 94 were evacuated.

On Friday, three municipalities in the Outaouais region of western Quebec – Pontiac, Val-des-Monts and Saint-Andre-Avellin – declared states of emergency.

“We are bracing for the worst and hoping for the best,” said Joanne Labadie, the mayor of Pontiac.

Roughly 200 soldiers filled sandbags and helped evacuate homes in the Outaouais and Maurice regions on Saturday night. On Sunday, an additional 400 troops are expected to be deployed there, as well as to Laval, where more than 1,500 homes and businesses remained under a flood watch.

Environment Canada issued rainfall warnings for seven areas of Quebec. Rain could be heavy at times, it said, and residents should expect an additional 20 millimeters into Saturday evening, increasing the risk of flooding in low-lying areas.

In Rigaud, Que., fire chief Daniel Boyer estimates that 20 to 40 millimetres of rain have already fallen and that the water level of the Ottawa River has already increased by as many as eight inches. A portion of a highway in the area already collapsed, he said, due to erosion from water coming down a mountain.

On Chemin de la Pointe-Seguin, a long stretch of road there on the western side of the Ottawa River, there’s no telling where the river ends and the road begins. In a short amount of time, many residents have already noticed a big difference in water levels.

France Duchesne doesn’t live by the river, but the Rigaud resident spent Saturday using her tractor to deliver as many as 700 sand bags to those who need them.

“We don’t like to see people sad like that and it’s people from our city so we want to help them,” she told CTV Montreal.

Resident William Bradley has chosen not to evacuate, hoping that the 250 sand bags he made will be enough to protect his home.

“My daughter bought a boat and a motor,” he told CTV Montreal.

Kevin Menard spent his Saturday helping his parents, who chose to evacuate, pack up their home. His parents didn’t expect more flooding just two years after water devastated the town.

“This morning we thought we had more time and the water rose so fast,” he said, as he filled boxes with his parents’ possessions.

Earlier this week, 230 homes and businesses in downtown Beauceville were flooded after the Chaudiere River burst its banks. The area saw the worst flooding since 1971.

NOT TAKING ANY CHANCES

In Ottawa, officials said that water levels of rivers and tributaries increased over night and that some roads have been closed. The level of the Ottawa River is expected to peak between Sunday and Tuesday, they added.

Residents are not taking any chances.

Sylvie Lamoine and his family have been filling sand bags since the early morning. Two years ago, their basement flooded, ruining everything.

“We hope this is not going to happen, but we’ve seen the worst and we’re expecting the worst,” he said.

In one Ottawa neighbourhood, Alfred Bourjeili was building an access bridge so that people on his street aren’t stranded as in 2017, when the road was completely flooded.

“We are not ready to leave and I don’t think we will leave so we want to make sure we have a safe out for the family,” he said.

Ontario has not yet asked the federal government for help.

The New Brunswick Emergency Measures Organization said on Saturday that rain will continue today and that additional amounts in the range of 20 to 40 millimeters are expected overnight.

Residents in 15 communities along the Saint John River, including Fredericton, were instructed to be on high alert.

Officials are warning those who live in areas that have experienced flooding in the past to expect the same this time around. They are asking residents to voluntarily evacuate or to take preventative measures, keeping in mind that many businesses will be closed on Sunday because of Easter.

Drivers should avoid roads covered by water and obey speed limits, and residents should stay from river edges while walking, they said.

In Barkers Point, N.B., on the eastern bank of the Saint John River, residents Randall Wasson and Cassie Smardon raced to fill up sandbanks before river levels rise this evening. He and his family experienced flooding as recently as last year.

“I just don’t want to go through what I went through last year,” Wasson told CTV Atlantic. “It took two or three months of dealing with paperwork.”