If there was any question whether First Capital Realty were serious about building something substantial and out-of-the-ordinary when they bought the 11 ha/28 acre former Christie’s Cookies plant site at Park Lawn and Lake Shore in the Toronto borough of Etobicoke, any doubts would have been erased for observers of the world’s city-building scene when the company hired Allies and Morrison of London to lead the master planning with Toronto’s renowned Urban Strategies Inc.. Architects and Urban Planners, Allies and Morrison are best known internationally for their major transformation of the area around King’s Cross station in London, a derelict 24 ha/60 acre site where regeneration started in 2007, has since been embraced by Londoners, and continues to grow today. Now, First Capital have submitted their concept proposal to the City of Toronto for the Christie’s site, fashioned to create a mixed-use neighbourhood that could rank as a major destination within the GTA. 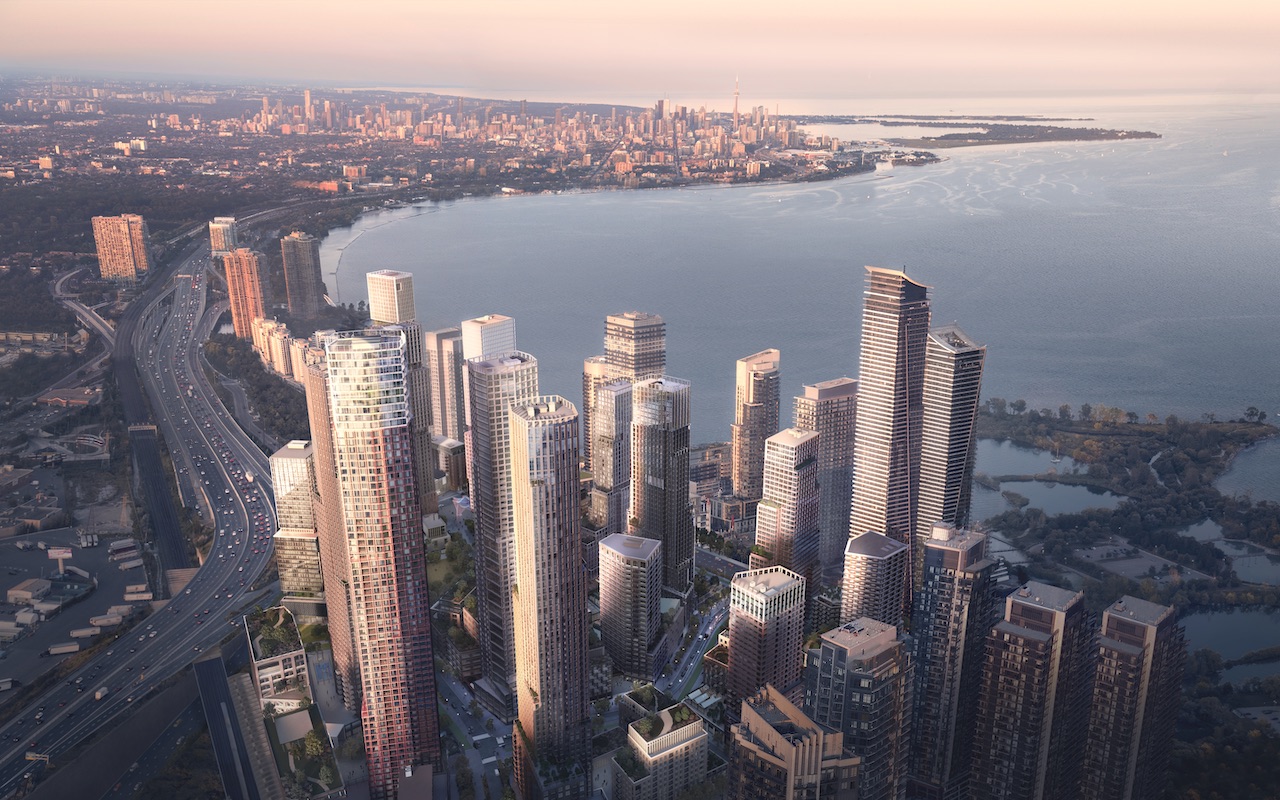 First Capital bought the site in 2016 (with a more recent purchase of the former Bank of Montreal location at 2194 Lake Shore) and has brought in the Canada Pension Plan Investment Board as a 50% partner. Beyond Allies and Morrison and Urban Strategies Inc., their design team includes Adamson Associates Architects as Architect of Record, ERA Architects covering heritage aspects, landscape architecture by DTAH of Toronto and Gross Max of Edinburgh, engineering by Arup, transportation planners Hatch and BA Group, and more. Over the last three years, the proponents held two well-subscribed public meetings asking attendees for their input on what they’d like to see on the site, and much of what is proposed in the ground realm at least is based on some of the wish list. 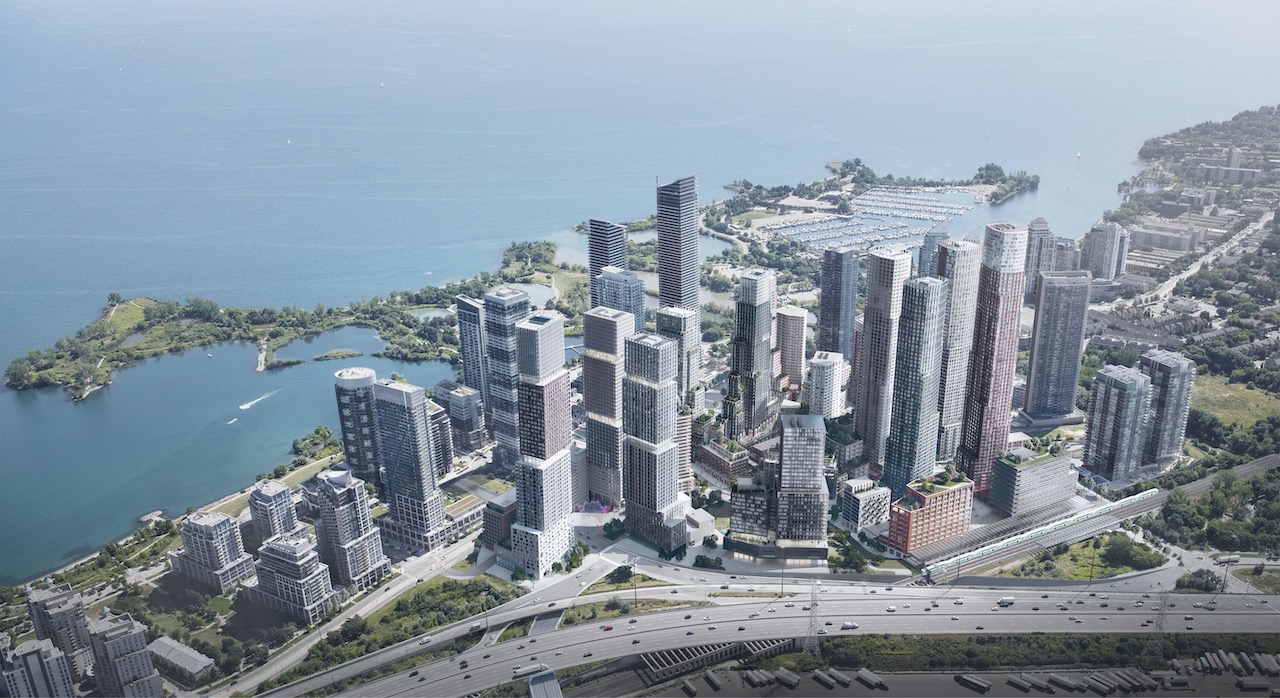 The scale of what has been proposed will take many off guard, with 15 towers proposed higher than 20 storeys tall, the tallest topping out at 71 storeys, or similar in height to the taller of the two Eau du Soleil towers now being completed nearby. Conversely the depth of the neighbourhood amenities and services, and the degree of animation of the neighbourhood, will appeal to many living in the area now who are looking for a more complete, more cohesive area of the city to live in. 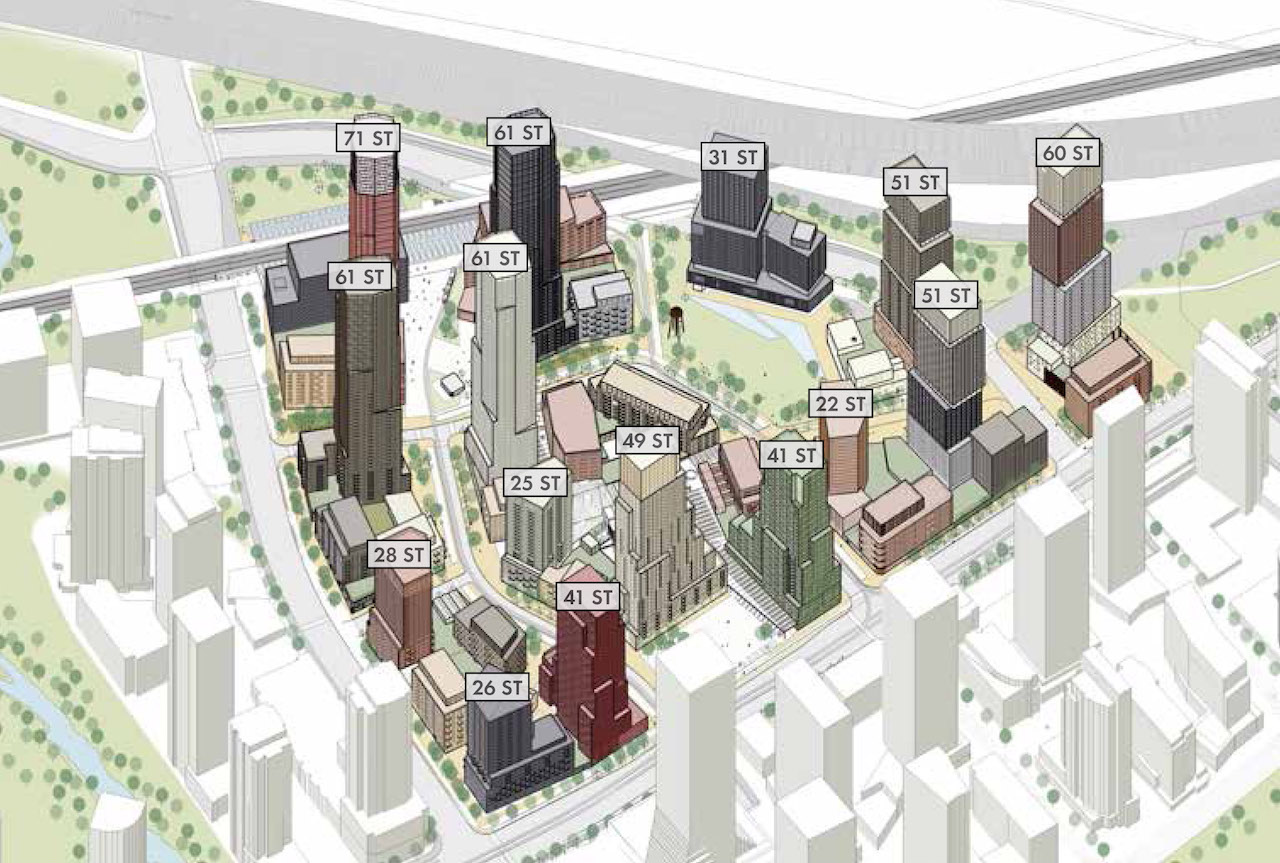 The height in storeys of the tallest buildings proposed at 2150 Lake Shore, image via submission to the City of Toronto

Across the Christie’s site, the plan calls for 41,900 m² of commercial office space, approximately 42,700 m² of retail, entertainment, restaurants, and community-oriented shops, and a 20,200 m² hotel with affiliated commercial space. A total of 7,446 residential units are proposed. 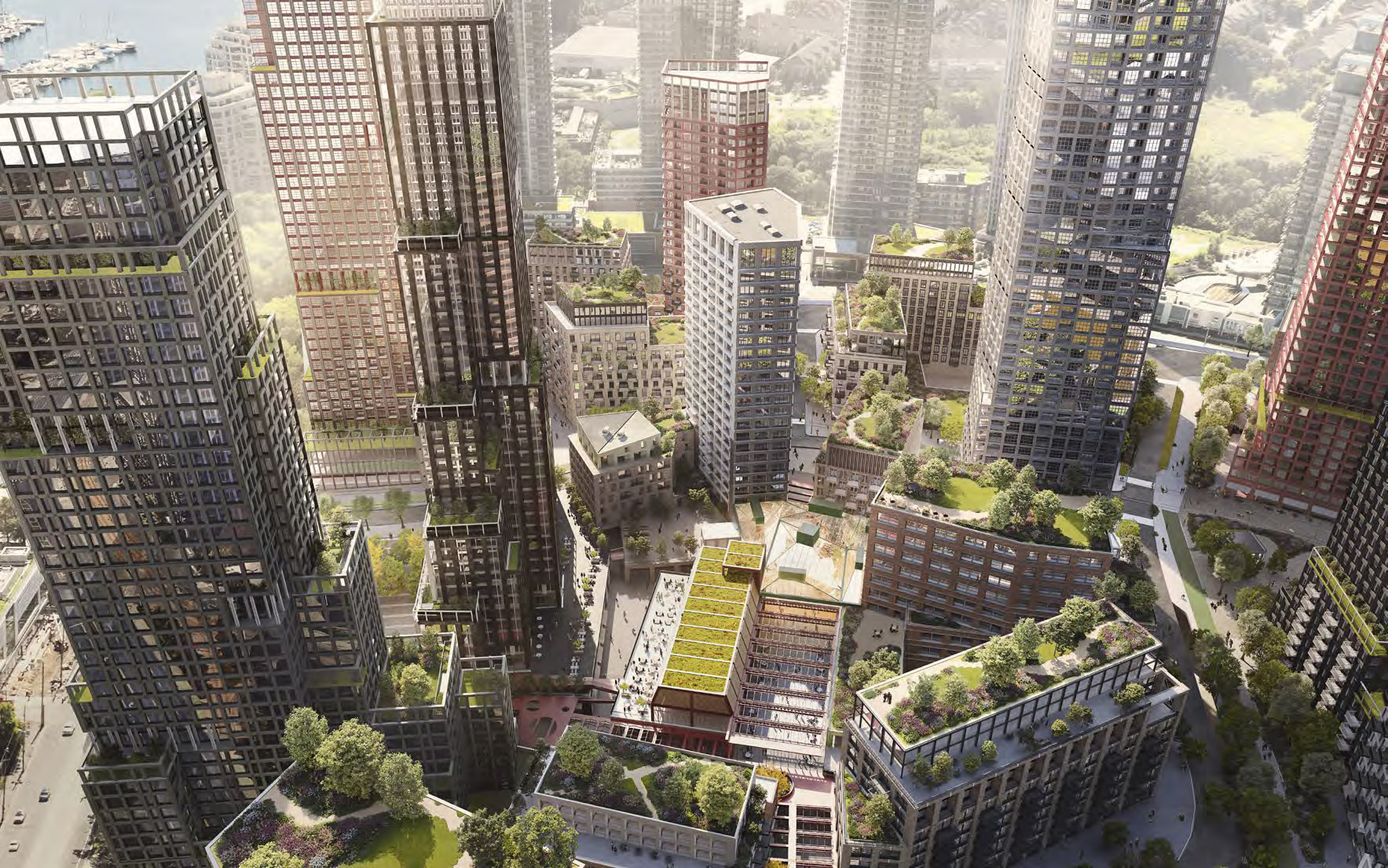 Looking down into the heart of the site, image courtesy of First Capital Realty

Three public squares, a park, a central sheltered galleria lined with shops and restaurants, several pocket-sized places to gather, and pedestrian mews are proposed to be strung throughout the site. Bicycle lanes would be introduced, while new roads would handle increased car traffic to the area, including one “Relief” road extending from Park Lawn and the Gardiner eastbound off ramp around most of the site to Lake Shore Boulevard, taking some volume of traffic off the Park Lawn and Lake Shore intersection. On-street traffic through the site would be unnecessary for most residents, and parking garage entrances are planned for the periphery of the site from Park Lawn Road and the “Relief” road, with the garages connected below ground. The proponents also suggest rebuilding of the Gardiner access ramps to and from the east of the site to feed into the new “Relief” road, while Lake Shore would get four new traffic lights along it, slowing it to an urban speed in an area that cars tend to speed through now. 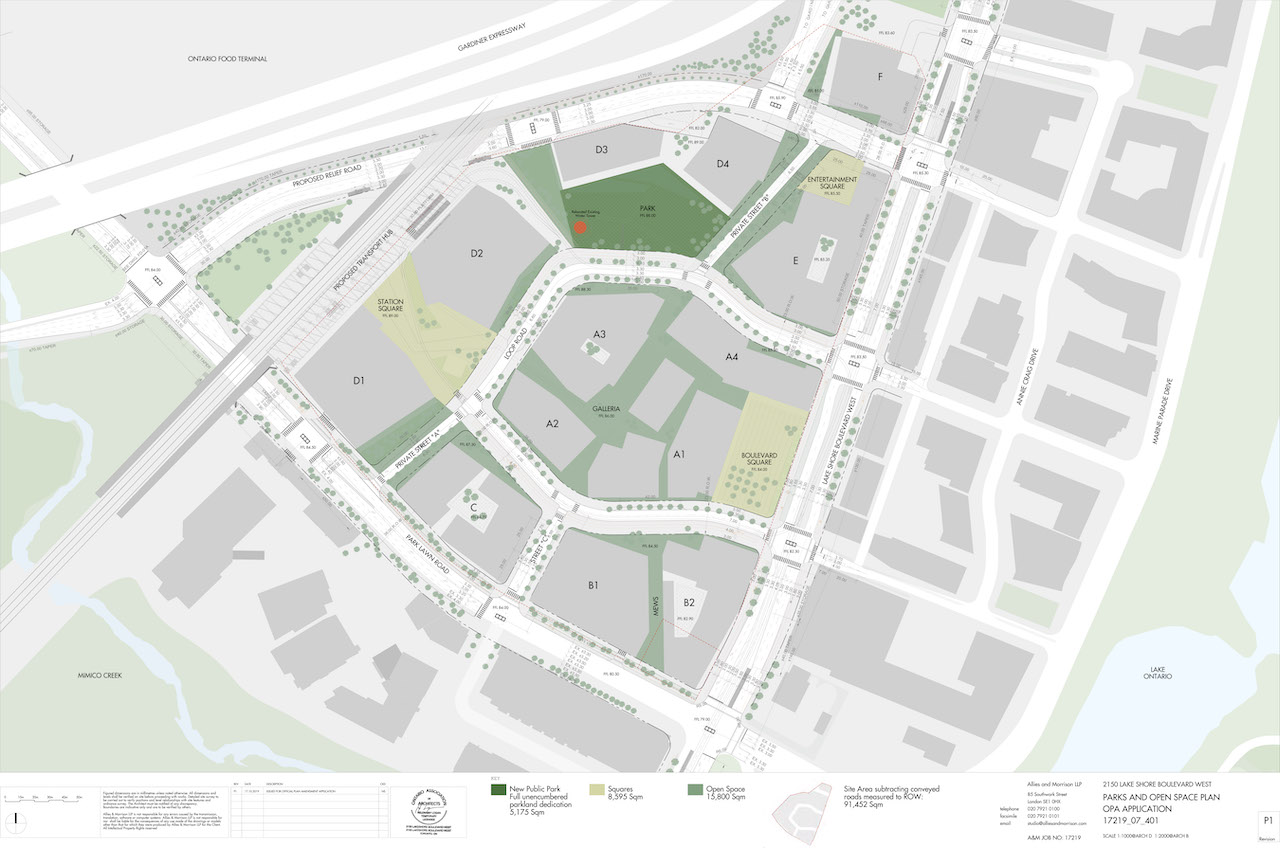 The open space plan for the site includes a park and squares connected by walkways, image via submission to the City of Toronto

A streetcar loop is proposed through the site, bringing vehicles up from Lake Shore Boulevard past the various squares to a new Park Lawn GO train station, before looping back to Lake Shore. Likely, 501 streetcars which currently turn around at the Humber Loop (approximately every second streetcar) would now turn around within the Christie’s site. Bus lay-bys are also proposed for the GO station which would also allow easy connections with the 66B Prince Edward bus. 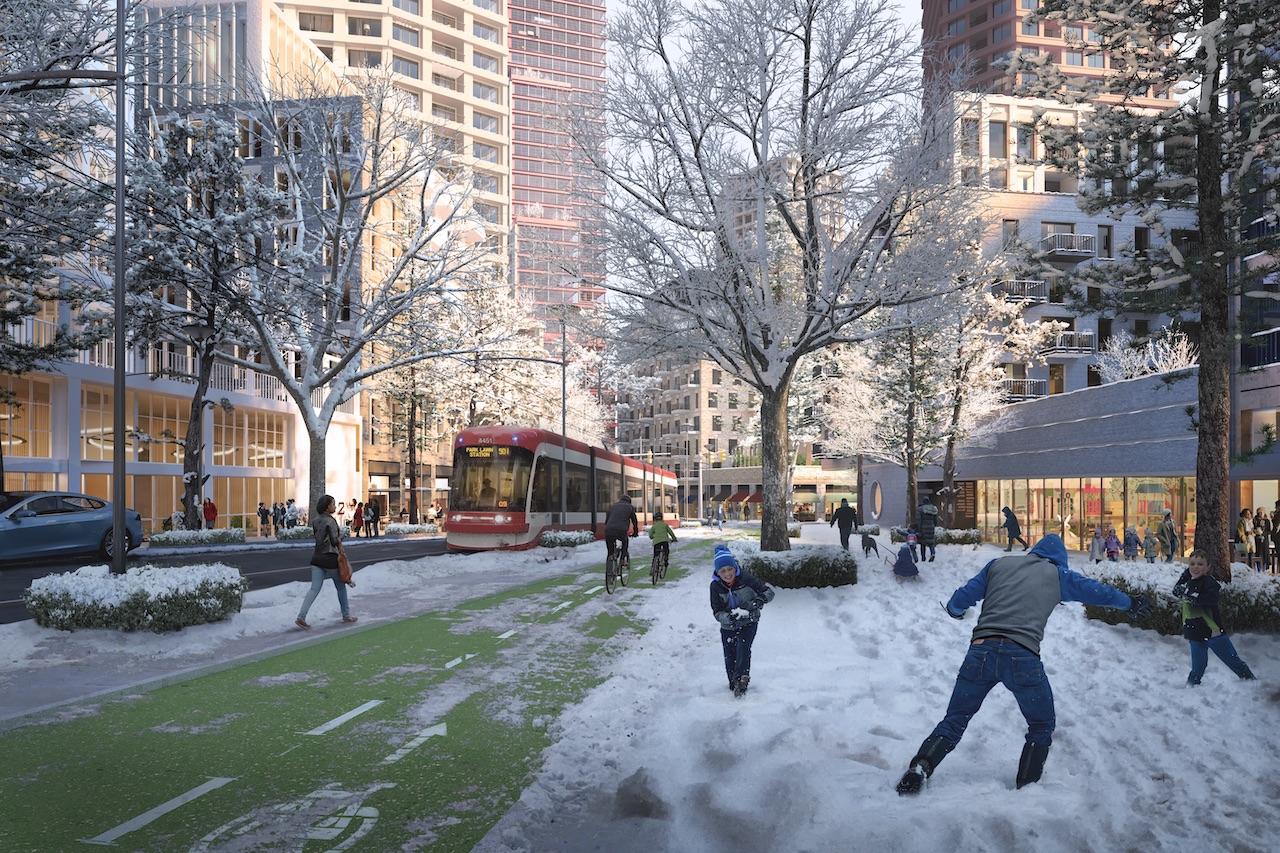 A streetcar travels the loop through the site beside plowed, dedicated bike lanes, image courtesy of First Capital

The largest of three squares proposed within the site is Station Square, which leads pedestrians and streetcars to the intermodal transit hub from the south. The second largest square, dubbed Boulevard Square, fronts Lake Shore Blvd across from existing Humber Bay Shores towers, while another dubbed Entertainment Square, is planned closer to the east end of the site. 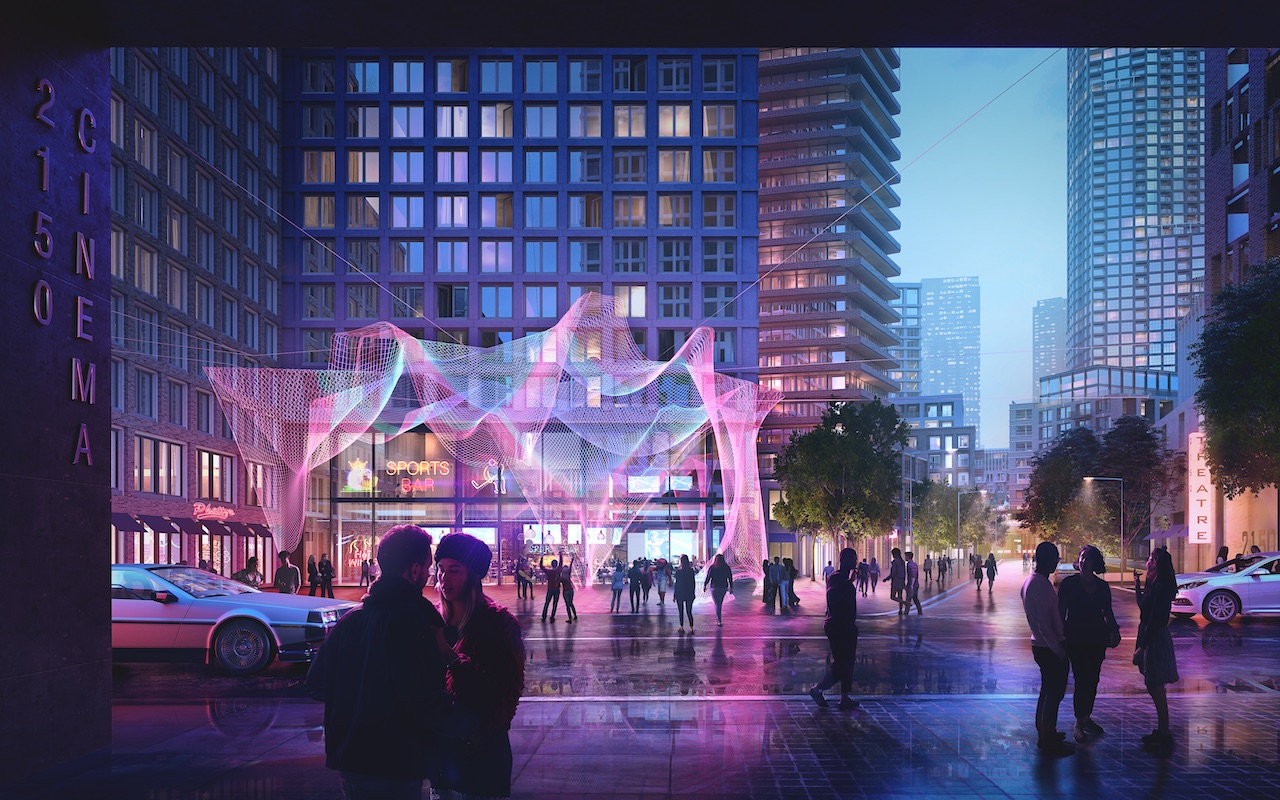 Retail is proposed to animate the ground level of a significant portion of the site overall, but the largest concentration is planned for the centre of the community, where a terraced Galleria shopping, eating, and strolling area would be sheltered between various towers and podiums. 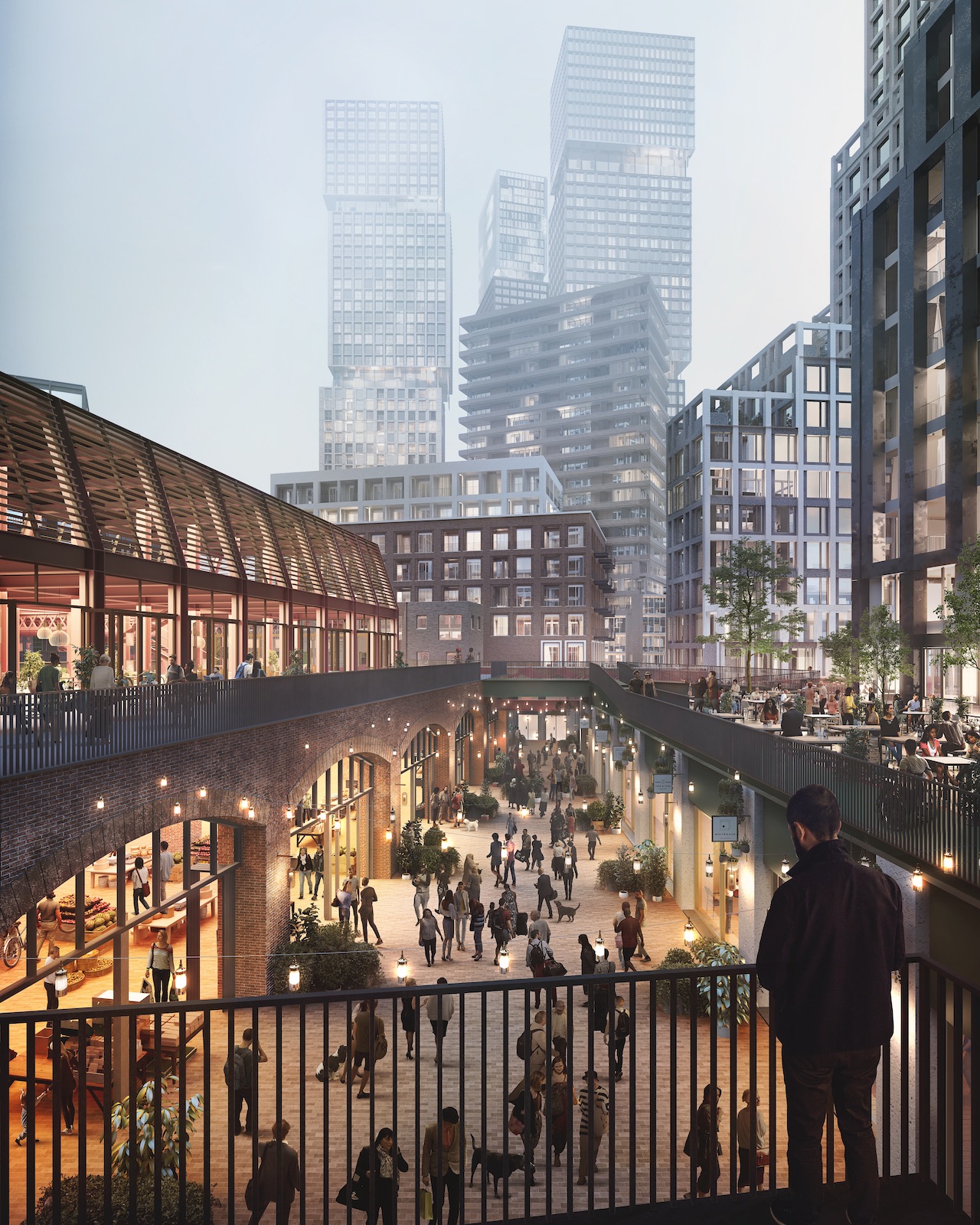 Looking east, down into part of the Galleria from a surrounding terrace, image courtesy of First Capital

The park would feature the water tower that now stands on the site, relocated so that it could be viewed at the end of various vistas into the site. 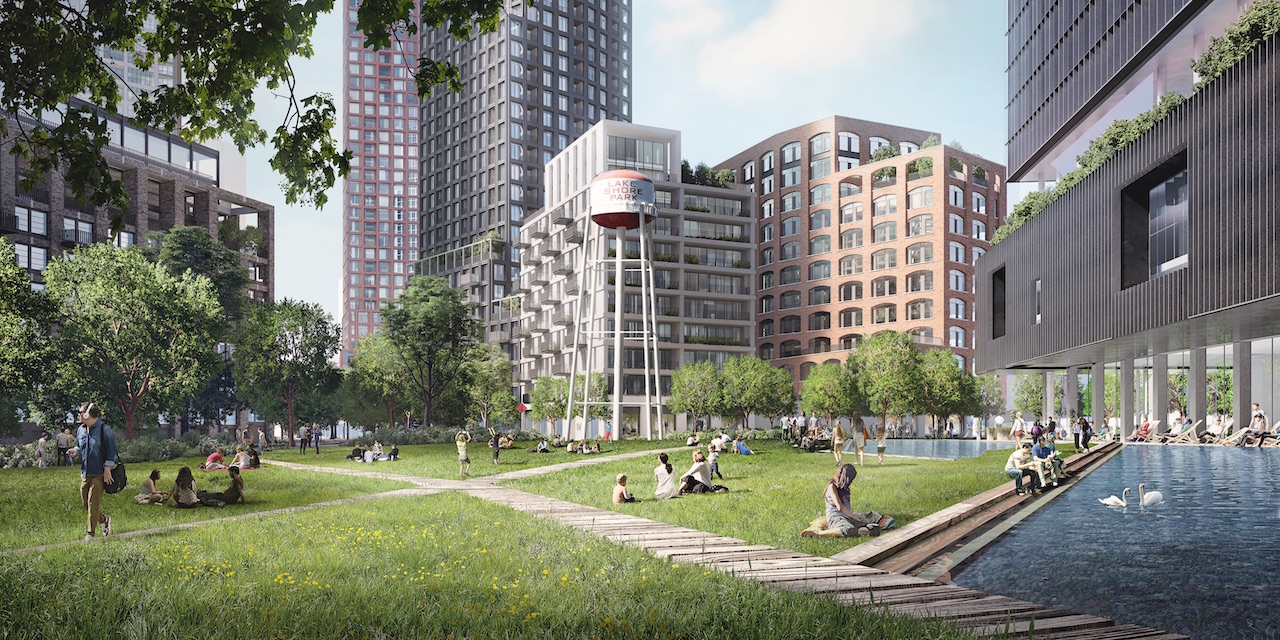 While the renderings are detailed, what is depicted in them remains conceptual at this point, indicative of the vision that First Capital has for the site, and not representing finished architectural designs for particular buildings. Jordan Robins, Executive Vice President and Chief Operating Officer at First Capital Realty, had this to say about the proposal upon its release:

“The vision for this Master-Planned development is to create an amenity rich, sustainable mixed use neighbourhood in Toronto that is seamlessly connected to the rest of the City. This neighbourhood will feature new and varied housing alternatives, significant employment space and complimentary retail space. Our commitment to infrastructure, design and placemaking shall serve to enrich this proposed development and the surrounding Humber Bay Shores community by providing both with vital, integrated transit options, improved commuter routes, and large active public spaces.”

Adam Paul, President and CEO of the Company, also issued a statement, saying:

“The conversion of the Development Site to allow for a mixed-use, transit-oriented development represents a critical milestone for our vision of revitalizing this significant Property. Our vision is to create a dynamic and vibrant master-planned neighbourhood with a high quality, sustainable urban design that fits exceptionally well with First Capital’s super urban strategy.”

There are still several steps that the proposal must travel through before we see Site Plan Approval applications for any buildings: the first are likely a few years off still. The site having been zoned exclusively as employment land previously—there were 500 jobs at the Mr. Chrsitie’s Cookie factory when it closed in 2013—First Capital has been in discussion with the City since its purchase regarding bringing more uses to the site. A result was that in early summer 2019, City Council and the Local Planning Appeal Tribunal (LPAT) approved the conversion of 9.9 ha/24.5 acres of the Development Site into a Regeneration Area with the remaining 1.4 ha/3.5 acres, closest to the proposed GO station, retained as Employment Lands. Totally density across the site is proposed at 7 million ft², 1 million ft² of retail, office and service-based uses, and 6 million ft² of residential. Parks and open community gathering areas represent over 25% of the site, while separation distances between towers typically far exceed the City’s 25 metre minimum, as seen below. 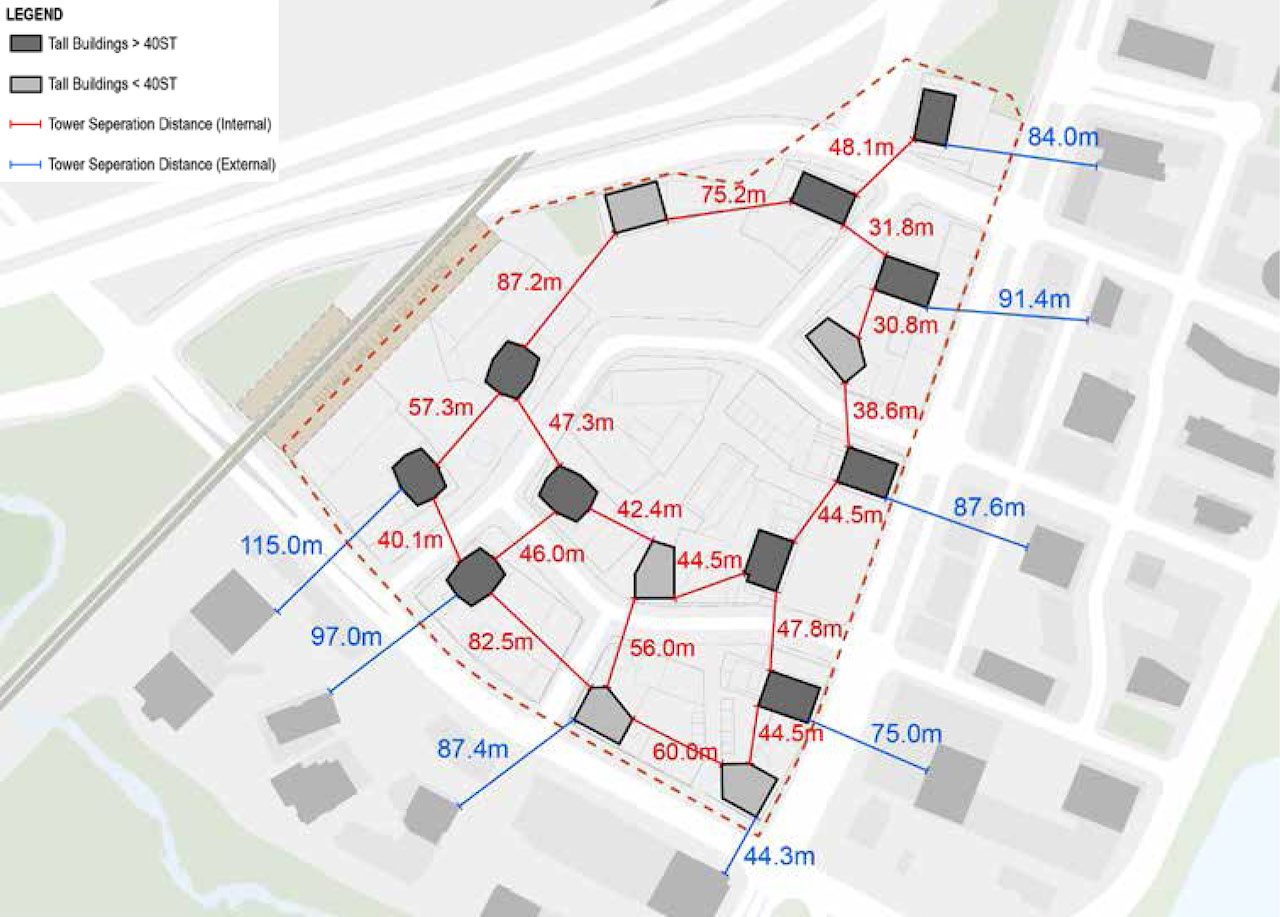 Separation distances between the proposed towers, image via submission to the City of Toronto

At the same time that this application is proceeding, the City of Toronto is working on a Secondary Plan for the area, for which there was a public consultation held on October 17th, while a Park Lawn Lake Shore Transportation Master Plan Study also continues at the City. Further public consultations will inform the final versions of those plans, while this plan will no doubt factor into them as well. 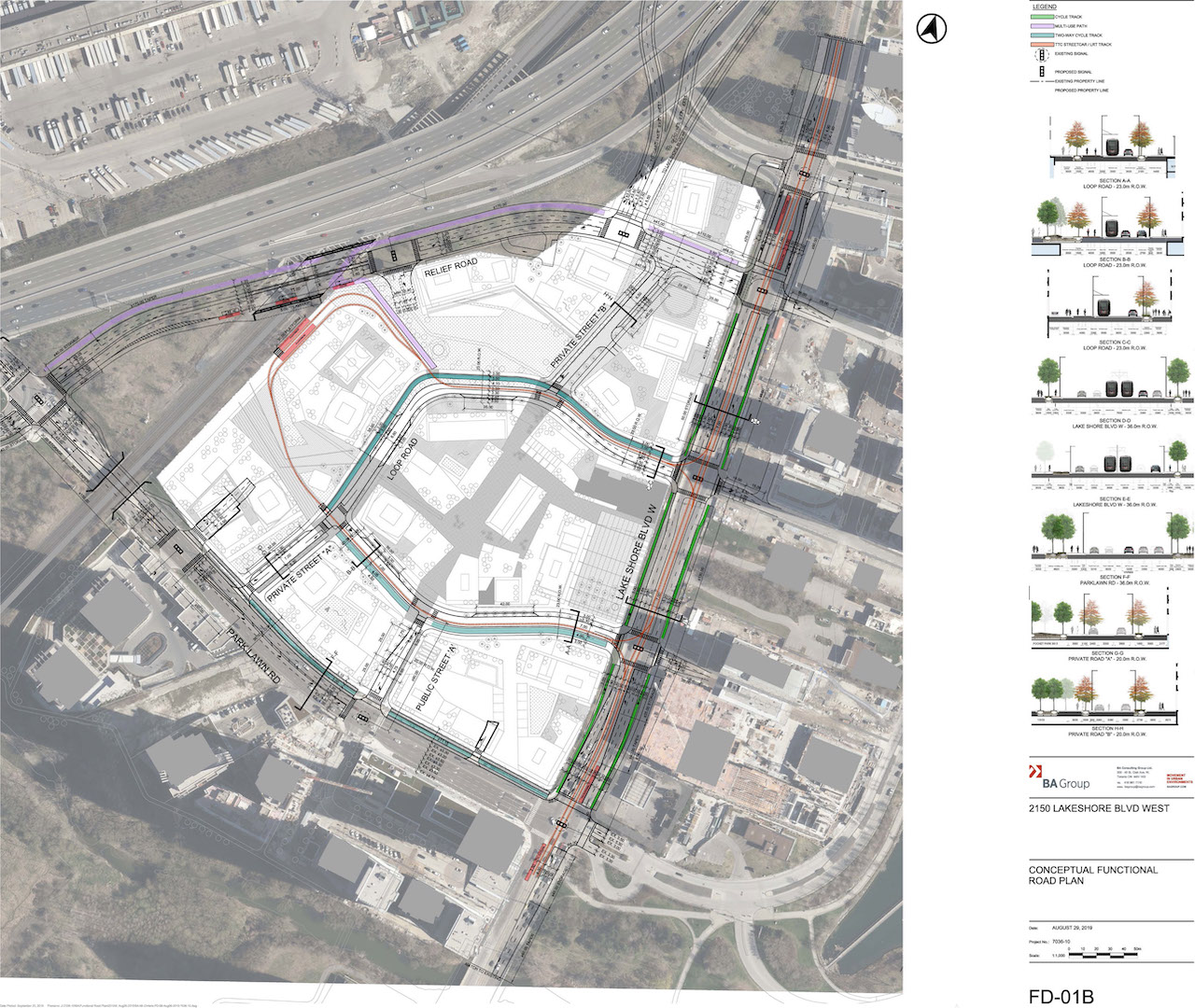 Road infrastructure proposed for 2150 Lake Shore, image via submission to the City of Toronto

The planning rationale for the 2150 Lake Shore development, available as part of a suite of documents submitted to the City to advance an Official Plan Amendment application, goes into far more detail than we can cover in this article.

A third public consultation on the site is expected soon, likely during November. UrbanToronto will follow up with more information as it becomes available. For now, additional information about the proposal and more images can be found in our Database file for the project, linked below. Want to get involved in the discussion? Check out the associated Forum thread, or leave a comment below.